Operation Enduring Freedom is the official name for the "military conflict" commonly known as the "War in Afghanistan," which is a group of military actions within the Global War on Terror (GWOT). The operation in Afghanistan is an ongoing conflict between Afghanistan, the United States, Russia, the United Kingdom, France, Canada, Poland, Germany, Italy, Spain, Australia, New Zealand, the North Atlantic Treaty Organization (NATO), Uzbekistan, Turkmenistan, Tajikistan, and the International Security Assistance Force (ISAF) against two Islamic fundamentalist groups in Afghanistan: the Taliban and Al-Qaeda.

The Taliban came to power in Afghanistan in 1996, the same year that international terrorist and Al-Qaeda leader Osama bin Laden immigrated to the country with the invitation of the Northern Alliance. Following the terrorist attacks on September 11, 2001, the United States presented the Taliban with a five-point ultimatum to the Taliban government, which was suspected of providing asylum to Al-Qaeda terrorists. After the Taliban rejected the ultimatum and the U.S. rejected Taliban proposals to try suspected terrorists under Islamic Shari'a law, the United States and the United Kingdom initiated military action on October 7, 2001. Although the U.S.-led coalition removed the Taliban from power initially and severely damaged Al-Qaeda in Afghanistan, the operation has overall had little success in defeating the Taliban insurgency. Operation Enduring Freedom has been transformed into a full war and has thus far lasted significantly longer than expected. 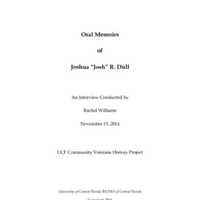 An oral history of Joshua R. Dull, a Creative Writing student at the University of Central Florida (UCF) in Orlando, Florida. Dull served in the U.S. Air Force (USAF) during the Global War of Terror (2001-2009) and completed his service as a Senior…

An oral history of Derek Mason Henry's experience serving in Afghanistan during Operation Enduring Freedom. Henry enlisted in the United States Army and served in the 2nd Battalion, the 124th Regiment, the 53rd Infantry Division. Interview topics…
View all 2 items