The Fifteenth United States census records for Cumberland, Maine, for 1930. The Census divides the population by categories of name, age, sex, race, marital status, occupants and relation to head of house, whether the home is owned or rented, value of home or rent, whether home is a farm residence, whether the home has a radio, college attendance, literacy, birthplace and birthplace of parents, citizenship status, language spoken before coming to United States, year of immigration, occupation or business, class of worker, whether worked the previous day, military status, and war or expedition participated in.

A notable resident listed in this record is Paul Havener. Born in Oklahoma on March 23, 1923, Havener moved to Maine after the death of this father. He joined the United States Army Air Corp in February 1943, in Portland, Maine. He reached the rank of Corporal by the time he was discharged in 1945. While in the Army Air Corp, he trained as a tail gunner, protecting aircraft from enemy attacks at the tail or rear of the plane. He married Esther Caroline Brown on June 23, 1945. They had three children. Paul Havener passed away on October 8, 1992, at age 69, and is buried at the Florida National Cemetery in Bushnell, Florida. 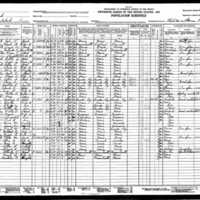