Brothers John and Peter Nadzeika posing in front of a home. One of the brothers sits on the other's shoulders. The Nadzeika brothers were first generation American citizens whose parents came to America from Lithuania. The Nadzeika family settled in Morris County, New Jersey, and built a farm and tavern. The farm thrived in the 1930s, becoming so essential to the area that the United States Army gave the eldest Nadzeika brother an exemption from the draft for critical civilian work on the farm. The two younger brothers pictured both enlisted into the military in 1941, in the wake of World War II. John became a Merchant Marine, and Peter became a Tech 4 in the United States Army.

Originally created by Nadzeika Family and published by Ancestry.com.

Copyright to this resource is held by the Nadzeika Family and is provided here by RICHES for educational purposes only. 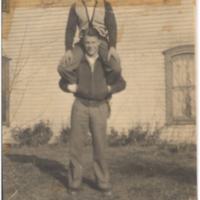