The Fourteenth United States Census records for Effingham, Illinois, for 1920. The census divides the population by names of residents at same address, relationship of person enumerated to the head of the family, whether home owned or rented, if owned, whether free or mortgaged, sex, race, age at last birthday, marital status, year of immigration to United States, citizen status and date of naturalization, whether attended school any time since September 1, 1919, literacy, person's place of birth, mother and father's place of birth, mother and father's native tongue, whether able to speak English, profession or work preformed, industry or business of work, whether employer, salary or wage worker, or working on own account, and number of farm schedule.

A notable resident listed in this record is Dale D. Davis. Davis was born in Effingham, Illinois, in 1920. He graduated from Effingham High School and then attended Eastern Illinois Teacher’s College in Charleston, Illinois, for two years. In November of 1940, he entered the United States Army Air Corps and was trained as a pilot. He served during World War II in the South Pacific, and became a Captain in 1943. That same year, he was recognized with a Distinguished Flying Cross and a Purple Heart. Davis’s wife, Florence, was also a pilot, and she was part of the United States Women’s Airforce Service Pilots (WASPs). Davis continued to serve in the military through the Korean and Vietnam Wars. He attended college at the University of Illinois Champaign-Urbana, where he studied aeronautical engineering. Davis then won a Guggenheim Fellowship to study jet and rocket propulsion at Princeton University. He later worked at Holloman Air Force Base, and then at the Federal Aviation Administration, where he was a leader in the supersonic transport program. He also directed the Air Force Flight Dynamics Laboratory at Wright-Patterson Air Force Base. During the course of his military career he rose to the rank of Colonel. Davis eventually moved to Florida, where he passed away in 1994 at the age of seventy-three. He is memorialized at Florida National Cemetery in Bushnell, with his wife, Florence. 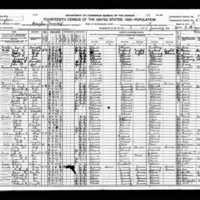