A page from a battalion history book, which documents the service of the 62nd Naval Construction Battalion, or the 62nd Seabees (C-B’s), during World War II. The book documents their entire service with text and photographs from each station and assignment. The page discusses the repair of Oahu after the attack on Pearl Harbor and the assault on Iwo Jima. The Seabees primarily worked in constructing vital infrastructure components during the war, such as communication network cables, water systems, naval yard pontoons, and airfields.

A notable individual in this photo is Everett Farrar. Farrar was born in St. Louis, Missouri, on September 19, 1920. Completing high school around 1940, Farrar worked as a grocery clerk during the Great Depression and enlisted in the United States Navy in 1942, after Pearl Harbor. Farrar was assigned to the 62nd Naval Construction Battalion. He provided vital construction and infrastructure repair after the attack on Pearl Harbor, and eventually airfield construction at Iwo Jima in 1945. Farrar later moved to Florida with his wife, Neva, whom he married in 1945. By 1957, Farrar worked for a large realtor in Fort Lauderdale, Florida. He passed away on May 20, 1996, and is buried in Florida National Cemetery in Bushnell.

United States Department of the Navy

United States Department of the Navy

Originally created and published by the United States Department of the Navy. 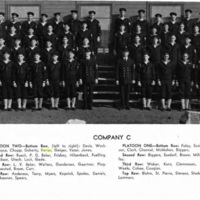