Daily Personnel Diary for the USS Astoria. The document includes gains, losses, miscellaneous, name, file or service number, rank or rating, change abbreviation, and description of and authority for change.

A notable person listed is Willard Kenneth Paeplow. Paeplow was born on June 6, 1926, in Buffalo, New York. On April 21, 1944, just before his eighteenth birthday, he joined the United States Navy, where he served until June 1947. During his enlistment, Paeplow served on the USS Springfield (CL-66). He was present when the ship escorted President Franklin Delano Roosevelt to the Malta Conference in January 1945. Paeplow enlisted in the United States Navy again in June 1964, and served another twenty-two years, before retiring in June 1986. He passed away on April 22, 1993, and is buried in the Florida National Cemetery in Bushnell. 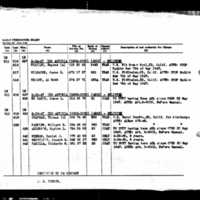