Muster Roll of Officers and Enlisted Men of the U.S. Marine Corps

Muster Roll of Officers and Enlisted Men of the U.S. Marine Corps

The Muster Roll of Officers and Enlisted Men of the United States Marine Corps, detailing the Marine personnel at the General Supply Company, Fifth Field Depot station in the Pacific in July of 1945. The majority of names on the muster roll are Private First Class.

A notable individual listed is William Boese (1923-1996), along with his wife, Frances. Boese was born on March 22, 1923, and grew up in Joliet, Illinois. He entered the United States Marine Corps on August 26, 1942, training in California before receiving his assignment in the Pacific as supply support. He served in the 4th Base Depot and the 5th Field Depot, assisting combat units as they sought to gain ground against the Japanese in the Pacific. After his discharge, Boese worked for the Elgin, Joliet, and Eastern Railway as a switchman. He married his wife, Frances, and fathered to daughters, Aldene and Arlene. The family moved to the Tampa Bay, Florida, area in 1978. On February 22, 1996, Boese died at the age of seventy-two. The Florida National Cemetery in Bushnell, Florida, placed a memorial headstone in his honor. 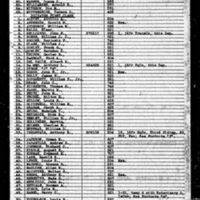