The Fifteenth United States Census records for Middletown Township in Delaware County, Pennsylvania, for 1930. The census divides the population into categories of name, age, sex, race, marital status, occupants and relation to head of house, whether the home is owned or rented, value of home or rent, whether home is a farm residence, and whether the home has a radio. It also records college attendance, literacy, birthplace and birthplace of parents, citizenship status, language spoken before coming to United States, year of immigration, occupation or business, class of worker, whether they worked the previous day, military status, and the war or expedition participated in.

A notable resident listed in this record is Charles Henry Craig (1896-1982). Craig was born on October 6, 1896, in Dixmont, Maine. He was drafted in 1917, and his service began on March 31, 1917. He served with Battery C 4 Field Artillery in the United States Army, but never went overseas. He was stationed in Justice Precinct 8, Bexar, Texas, in 1920, and was honorably discharged on April 6, 1920, as part of demobilization. After his discharge, Craig moved to Delaware, Pennsylvania, and married Edith Hazel Chambers on December 30, 1922, with whom he had four children: Charles (1923), Elizabeth Sarah (1925), Mary Louise (1927), and Frances (1936). In 1940, Craig became a principal superintendent of Williamson School in Media, Pennsylvania, while maintaining his job as a tree surgeon. Craig registered for the “Old Man’s Draft” for World War II on April 27, 1942. Charles and Edith moved to Florida by 1954. Craig passed away on March 9, 1982 in Hollywood, Florida, and Edith followed in March 1989. They are buried together in the Florida National Cemetery in Bushnell, Florida. 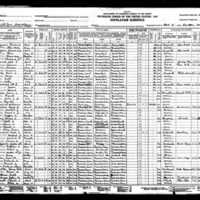