The Fifteenth United States census records for Providence, Rhode Island, for 1930. The census divides the population into categories of name, age, sex, race, marital status, occupants and relation to head of house, whether the home is owned or rented, value of home or rent, whether home is a farm residence, whether the home has a radio. It also records college attendance, literacy, birthplace and birthplace of parents, citizenship status, language spoken before coming to United States, year of immigration, occupation or business, class of worker, whether they worked the previous day, military status, and the war or expedition participated in.

A notable resident listed in this record is Max Litwin (1911-1995). Born in Poland in 1911, Litwin's father immigrated to the United States in 1914. Max and the rest of his family followed in 1921. They lived in Providence, Rhode Island, along with many other Jewish immigrant families. Litwin worked as an insurance agent and salesman in Providence prior to his military service. In August of 1943, he began his service in the United States Army. He rose to the rank of Private First Class during World War II, and served until September of 1944. At some point after his military service, Litwin moved to Miami, Florida. He passed away in Florida in 1995 and is memorialized at Florida National Cemetery in Bushnell, Florida. 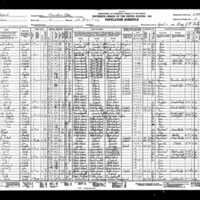