Ten uniformed soldier of the 484th Bombardment Group pose in front of a plane around 1943. A cartoon drawing of a man wearing a top hat and tuxedo appears on the side of the plane along with the caption, "Stew Bum".

A notable solider who appears in the photograph is Sidney J. Malatsky (1924-1944). Born in 1924 in Chelsea, Massachusetts, Malatsky's parents were Russian Jewish immigrants who had came to the United States around the turn of the century. Malatsky attended Chelsea High School, where he made the honor roll and was active in band, orchestra, the school yearbook, and debating club. In 1942, he enlisted in the United States Army Air Corps Reserves and entered the service in January of 1943. He served in the 827th Bombardment Squadron, 484th Bombardment Group, Heavy, and rose to the rank of 2nd Lieutenant. His plane was hit during a mission in November 1944, and the crew crash-landed the plane in the Adriatic Sea. The plane broke in half and Malatsky was killed in the crash at the age of twenty. He was awarded the Air Medal and Purple Heart, and is recognized on the Tablets of the Missing at Florence American Cemetery and Memorial in Italy, as well as at Florida National Cemetery in Bushnell, Florida. 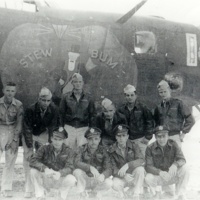