The Sixteenth Unites States Census records for Lincoln Park City, Wayne County, Michigan, for 1940. The census divides the population by name, age, sex, race, marital status, residence, home owned or rented, value of home or monthly rent, whether living on a farm, other residents of same address, relation to head of house, attended school or college after March 1940, highest grade completed, state or foreign country of birth, employment status, hours of work per week, duration of employment, and wages. Supplemental questions include the father and mother's birthplace, language spoken in home during childhood, veteran status, father's veteran status, social security, usual occupation and industry, class of worker, if women have been married more than once, age at first marriage if so, and number of children born.

A notable resident listed in the record is Gerald Wilford Near (1922-1995). Born on May 27, 1922, in Detroit, Michigan, Near married Ruth Marie Harris in Fulton County, Ohio, on August 17, 1941. On October 15, 1942, Near enlisted in the United States Marine Corps. He was assigned to the 12th Defense Battalion in January 1943, where he would remain for the majority of his military career. Near’s unit arrived at Woodlark Island, New Guinea, in June 1943, where they protected a United States airfield that screened the landings in the Solomon Islands. Near left the 12th Defense Battalion around June 1944, when the unit became redesignated as the 12th Antiaircraft Artillery Battalion. He returned to the United States and reported to the Marine Barracks at the Navy Yard in Philadelphia, Pennsylvania, in July 1944. Near was discharged from the Marine Corps as a Corporal on February 14, 1946. He died on November 17, 1995, in Venice, Florida, and was memorialized at Florida National Cemetery in Bushnell, Florida, on January 9, 1996.

Originally created by Anna Flatley and published by the United States Census Bureau. 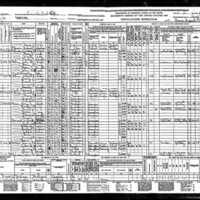