A newspaper article published by The Pittsburgh Press on June 19, 1896. The article addresses various events that are going on in Pittsburgh society. Of particular interest is the piece on the “Wild West” show with Thomas Morrow Pringle, who is Thomas Masters Pringle’s father. He is described as “the champion fancy shot of the world.” There were other shooting, racing, and acrobatic events as well as a parade and military drills.

Born on May 31, 1921, in Portage, Pennsylvania, Thomas Masters Pringle (1921-1995) married Helen Gray in Winchester, Virginia, on September 5, 1942. On October 17, 1942, Pringle entered the United States Army, training as an expert mechanic at Keesler Field in Mississippi. After he left the service on June 26, 1943, Pringle returned to Pennsylvania. Thomas and Helen had four children: Lydia, Becky, Helen, and Thomas. The family retired to Alachua, Florida, where Pringle passed away on March 16, 1995, at the age of seventy three. Although initially buried or cremated at the Pringle Hill Cemetery in Pennsylvania, he was interred at the Florida National Cemetery in Bushnell, Florida, on August 3, 1995.

Originally created and published by The Pittsburgh Press.

Copyright to this resource is held by The Pittsburgh Press and is provided here by RICHES for educational purposes only. 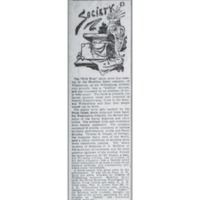