The State of Ohio marriage record for Alexander Lard Lucas (1893-1989) and Anna Thurman. The marriage license was filed and issued on June 27, 1918.

Born in Satilla Mills, Georgia, on June 6, 1893, Lucas moved to Jacksonville, Florida, as a teenager. By 1918, he had moved to Cleveland, Ohio, to pursue a career as a mechanic. Lucas was drafted into the United States Army on August 9, of 1918. Following his service, he worked as a tailor in Lansing, Michigan. By 1940, Lucas found a position as a shipping clerk for the Department of the Interior in Washington, DC. He lived in federal public housing attached to the North Interior Building in downtown Washington, where he worked. Between 1942 and 1989, he moved to the Miami area, where he passed away on March 2, 1989, at the age of ninety-five. Alexander Lucas is buried in the Florida National Cemetery in Bushnell, Florida.

Originally created and published by the Ohio Department of Health. 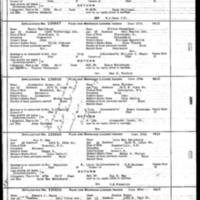