A postcard featuring the dinosaur-shaped Sinclair Gas Station in Weeki Wachee Springs. A handwritten note by Bonita Colson accompanies the postcard, describing a mobile home rental park across the street from the gas station that Weeki Wachee mermaids would frequently rent. She also notes that the dinosaur-shaped gas station was the only one of its kind in the world.

The Sinclair Oil Corporation was founded on May 1, 1916. The corporation created dinosaur exhibits in several world's fairs that featured a brontosaurus, which was the company's mascot. Other promotional materials featuring the dinosaur included bobble head toys and inflatables. 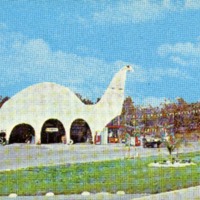