A letter from Myrtle Colson, manager of the May Museum of the Tropics, to the owner of the museum, John M. May, dated June 1, 1958. Colson tells May about the increasing sales to the museum due to efforts of the new owner of Weeki Wachee Springs, and discusses a new employee. 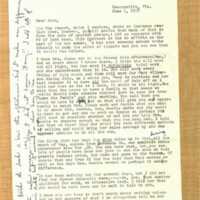