A poster for the Orlando Gay Chorus (OGC) concert, “Don't Touch that Dial.” The event was held at the Margeson Theatre, part of the Rita Lowndes Shakespeare Center in Loch Haven Park, located at 812 East Rollins Street in Orlando, Florida, on April 8 and 9, 2006. The event featured music from the 1930s, 1940s, and 1950s, including radio, big band and jazz songs. “Don't Touch that Dial” was sponsored by a range of organizations, including the Walt Disney World Company, Air Tran Airlines, and Watermark. Advance tickets were available through Urban Think, the Center and, orlandogaychorus.org. The poster has a brown background accentuating a vintage radio and a bold title. Featured artwork includes the logos of the OGC and various sponsors across the bottom of the poster. 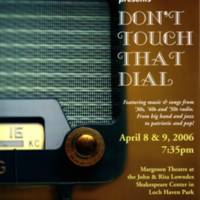