The enlistment record for Thomas Hanandos by the United States Colored Troops on January 12, 1863. The record provided individual information on soldiers including name, age, birthplace, occupation, date of enlistment, and location of enlistment.

Thomas Hanandos was a runaway slave from Saint Augustine, Florida. On January 12, 1863, Hanandos enlisted into the Company B, First Regiment South Carolina Volunteer Infantry, serving as a Private during the American Civil War. During his time in the military, his pay was cut from $13 to $7 a month. On October 21, 1863, Hanandos deserted Camp Shaw. Four days later, he returned and was detained by United States Army officials until November 4. He was released back to active duty by Union Brigadier General Rufus Saxton. After the war, Hanandos was acquitted for the charge of desertion on November 14, 1889, and received an Army pension the same day. Little is known about his life after the war other than his interactions with the federal government. Hanandos passed away on November 24, 1915, and was later buried in the Saint Augustine National Cemetery in Saint Augustine, Florida in Section A, Plot 190. 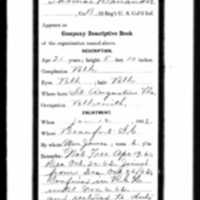