A page from the city directory for St. Augustine, Florida, from 1948. The City Directory lists the names of the head of the household and in the case of a married man, the name of his wife. The Directory also gives shorthand description of the occupation and place of employment of the head of the household as well as their address. The Directory also includes advertisement from local businesses.

A notable resident listed in the directory is Fred Wimbush (1920-1949). Born in Emanuel County, Georgia, Wimbush later lived in Lyons, Georgia, before relocating to St. Augustine, Florida, by 1935. On July 14, 1943, Wimbush enlisted in the United States Army, where he reported to duty at Camp Blanding near Starke, Florida. He eventually served with Company H as part of the 25th Infantry Regiment of the 93rd Division. Wimbush and his segregated regiment served in the Pacific Theater of World War II, serving in both a labor and combat capacity. Wimbush received an honorable discharge on November 29, 1946. After the war ended, Wimbush returned to St. Augustine, where he lived until his death on January 14, 1949, at the age of twenty-eight. He is buried in Saint Augustine National Cemetery in Saint Augustine, Florida in Section E, Plot 25.

Originally created and published by the City of St. Augustine. 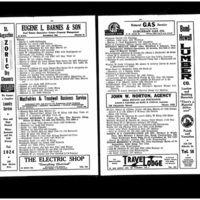