The Descriptive and Historical Register of Enlisted Soldiers of the Army is a record of all the individuals who enlisted in the United States Army between 1798-1914. The register includes information about the individual’s age at time of enlistment, birthplace, occupation, physical description, rank, and date and cause of discharge. This page of the Register of Enlistments has an entry for Richard Bourke.

Richard Bourke was born in Rathkeale, Ireland, in 1808. Sometime prior to 1832, he immigrated to the United States, where he worked as a laborer. At twenty-four years of age, he enlisted in the United States Army out of Albany, New York. Private Bourke served with Company C of the 2nd Artillery Regiment during the Second Seminole War. He died on December 28, 1835, during the Dade Massacre. He is memorialized at St. Augustine National Cemetery in Florida.

In 2017, the University of Central Florida was one of three universities selected to launch the National Cemetery
Administration’s Veterans Legacy Program Project. The program engaged a team of scholars to make the life stories of veterans buried in the Florida National Cemetery available to the public. The project engages UCF students in research and writing and fosters collaboration between students, faculty and local Central Florida schools to produce interactive curriculum for K-12 students. The corresponding website exhibit uses RICHES Mosaic Interface to create a digital archive of related data. The public can use the project-developed augmented-reality app at more than 100 gravesites at the Florida National Cemetery, where they can access the UCF student-authored biographies of veterans. 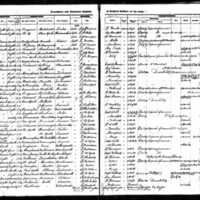