The Descriptive and Historical Register of Enlisted Soldiers of the Army is a record of all the individuals who enlisted in the United States Army between 1798-1914. The register includes information about the individual’s age at time of enlistment, birthplace, occupation, physical description, rank, and date and cause of discharge. This page of the Register of Enlistments has an entry for John Craig.

John Craig was born in Antrim, Ireland, in 1805. Sometime prior to 1834, he immigrated to the United States, where he worked as a farmer. At twenty-four years of age, he enlisted in the United States Army out of Albany, New York. Private Craig served with Company H of the 2nd Artillery Regiment during the Second Seminole War. He died on December 28, 1835, during the Dade Massacre. He is memorialized at St. Augustine National Cemetery in Florida.

"This resource is not subject to copyright in the United States and there are no copyright restrictions on reproduction, derivative works, distribution, performance, or display of the work. Anyone may, without restriction under U.S. copyright laws: 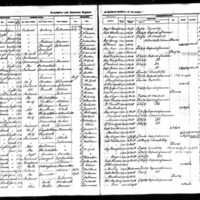