Okee-Chub-Bee, Or The Death of Thompson

Okee-Chub-Bee, Or The Death of Thompson

The Army and Navy Chronicle was published between 1835-1842. It shared news and stories about the activities of the United States Army and Navy and included pieces contributed by the soldiers or sailors themselves. This is a poem published about the death of Lt. Col. Alexander Thompson, written by someone from New York who identified themselves as “M.”

Alexander Thompson was born around 1793, in New York City to Alexander Thompson Sr. and Amelia Thompson née De Hart. Thompson Jr. had one brother, William, and three sisters, Margaret, Catherine, and Amelia. His father, Alexander Sr., died in 1809, and one year later, Thompson Jr. entered the United States Military Academy at West Point. He graduated early because of the onset of the War of 1812, in which he participated as a lieutenant. When the war ended, Thompson continued in military service, rising through the ranks until he became lieutenant colonel in 1837. During this period, he also married Mary Nexsen. They had no surviving children. In 1837, his 6th Infantry Regiment was sent to participate in the Second Seminole War. Thompson died leading his regiment at the Battle of Okeechobee on December 25, 1837. He is buried at the US Military Academy Post Cemetery at West Point and commemorated at the St. Augustine National Cemetery in Florida.

Digitized by the University of Michigan

OKEE-CHUB-BEE OR THE DEATH OF THOMPSON Beside the dark hammock, near Okee-cub-bee lake, Where moss-covered boughs of the Cypress-tree wave; No yell of the Red-men shall ever awake The sleep of the soldier who rests in his grave. When called to the conflict the warrior was dress’d In an armor, the fullness of earth cannot give; For God was his shield, and on that did he rest – In faith he could die – or through toils he could live. He led in the phalanx – encountered the foe – (Though fierce was the contest, and duty press’d hard;) Yet calmness and courage appeared on his brow, While danger nor threat’ning his purpose retard. Amidst the dead strife, as they moved ‘to the charge,’ The eye of a savage, well skill’d in its aim, Directed his rifle – its contents discharged – And ah! the brave THOMPSON lies low with the slain. His corse, by his own faithful men was conveyed From the field, where so freely he poured his life’s blood; Un-coffined, within the cold grave was he laid, Whilst, united in sorrow they mournfully stood; Then, plaintive and low, were ‘the prayers they said,’ And they wept for their chief as they buried him there, Then covered the grave they so hastily made; Nor a ‘funeral note’ was there breathed on the air. No fair sculptured marble marks out the lone spot, No willow droops over the dust of the slain; Yet ne’er shall his deeds nor his name be forgot, For Freedom will honor and cherish his fame. New York, March, 1833. M. 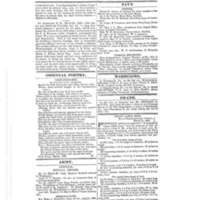