This Week in Sanford: Amusement Section

Advertisement for the Milane Theatre's feature showing of Just Suppose, for the week of June 21, 1926.

The Milane Theatre was built at 203 South Magnolia Avenue, the former location of the Star Theatre, an abandoned movie house. Scroggs and Ewing, architects from Georgia, prepared the plans for the Milane. The name of the new theater was derived from the combination of the presidents of the Milane Amusement Company president and vice president: Frank L. Miller and Edward F. Lane. The Milane opened in July of 1923 and seated 823 patrons.

In 1933, the Milane was sold to Frank and Stella Evans, investors from Lake Mary, Florida. The new owners renamed their business the Ritz Theater and held the property until the 1990s. However, the Ritz struggled financially in the 1960s and closed in 1978 due to failure to compete with the new multiplex theaters. The building remained vacant until 1984, when it reopened as the Showtime Cantina. The Showtime Cantina closed in 1988 and remained vacant and in decay.

In the mid-1990s, Ritz Community Theater Projects, Inc. acquired the property and began rehabilitation in 1998. On May 6, 2000, the theater reopened as the Helen Stairs Theatre in honor of the citizen who led the restoration project, Helen Stairs. The following year, the location was placed on the National Register of Historic Places. In 2008, additional renovations were completed at the theater was renamed the Wayne Densch Performing Arts Center in honor of the Wayne Densch Charitable Trust Fund for contributing to the renovations fund.

Originally owned by This Week in Sanford.

Copyright to this resource is held by This Week in Sanford and is provided here by RICHES of Central Florida for educational purposes only.

AGED 16, PLAYS OPPOSITE BARTHELMESS
__________________
Film fans will be interested to see Richard Barthelmess' new leading lady, Lois Moran, who will play opposite him in "Just Suppose," which opens at the Milane Theatre on Thursday.
Little Miss Moran is only sixteen years old. After playing in one or two pictures abroad she made her American screen debut in "Stella Dallas," in which she scored an instantaneous and remarkable success.
In "Just Suppose" she appears as a sweet aristocratic child of the South who falls in love with the very handsome and romantic Prince of "Koronia," played by Richard Barthelmess.
Others in the cast include Geoffrey Kerr, Henry Vibart, Harry Short, Bijou Fernandez and Prince Rokneddine.

HUNTING T.R.'S DOUBLE
________________
Men from many walks of life have been suggested as "living doubles" of Theodore Roosevelt to play the role of the late President in "The Rough Riders," which Paramount is to produce as a super-special this summer. The list includes many humble workmen, as well as men in every professional walk of life, including a former United States Senator.
One aspirant is J.A. Nicholas of Los Angeles, a carpenter, who actually was a member of the Rough Riders Regiment in his youth. Frank Hopper of Los Angeles is a book agent. Peter deJesu is a sailor at the Naval Training Station at Newport, Rhode Island. Dr. Judson Moshelle, a physician of Indianapolis, has been suggested, as has Reverend L. William Hones of Roscoe, New York. A sea captain, O.B. Olson, is another who has been put forward. Professor A. S. Eve is a professor of McGill University, Montreal. Ex-Mayor Davis of Woburn, Mass., represents municipal circles, and Edward Gabori is customs inspector at Christobal, Panama Canal Zone. Dr. A. P. Montague of Mercer University, Macon, Ga., has also been put forward.
An award of $500 has been offered by Paramount through Herman Hagedorn, Roosevelt's biographer, who is writing the screen story of "The Rough Riders," for the first person who sends in the name and photograph of the man finally adjudged best suited to play the part.

WHEN BEERY PARKED
_______________
Newspaper-lined vests were popular with Noah Berry at the time he made his first bid for theatrical fame in New York.
He also showed a marked liking for fresh air, even to the extent of spending nights on park benches and in less conspicuous spots. It was usually while sleeping that he used the news paper lining.
Within a day of his arrival in the big city Noah Berry had pawned everything he owned with the exception of his one suit. It was two years later that he finally got a start on the stage.
"And I have been broke many times since," says the now noted screen actor.
Berry is now playing what Hollywood critics declare is the greatest role of his career, that of Adjutant Lejaune, "the cruelest beast and bravest soldier" in "Beau Geste," Herbert Brenson's production of P.C. Wren's dramatic mystery-story of the French Foreign Legion.

SCREEN NOTES
____________
Studio prop men are supposed to fill in any kind of an emergency during the filming of a motion picture. And they did at the Paramount Long Island studio during the filming of Gilda Gray's first starring picture, "Aloma of the South Seas." A number of scantily clad girls, playing the parts of South Sea Islanders, had to hurry hither and theither serving patrons of a native cafe. They began to pick up splinters in their feet. Prop men carefully picked out each splinter and the feet were treated to a coating of liquid court-plaster.
* * * *
An entire city built for Zane Grey's "Born to the West," which Paramount is filming on the West Coast, was swept away during a terrific rainstorm in Southern California.
* * * *
Forty of the prettiest girls in Hollywood were engaged for a garden-party scene in Allan Dwan's next big Paramount picture, "Padlocked."
* * * *
Fifty-three camels were shipped to Yuma, Arizona, from Los Angeles for use in making Herbert Brenon's "Beau Geste." More than 2000 men were taken to the desert location for battle scenes in his Paramount mystery-romance. 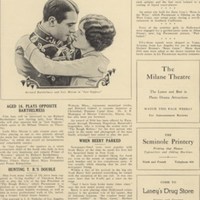