A poster for the Orlando Gay Chorus concert, “Odd Numbers”. The event was held at the John & Rita Lowndes Shakespeare Center in Loch Haven Park, located at 812 East Rollins Street in Orlando, Florida, on June 14 and 15, 2003. The event's tagline reads, "songs we've always wanted to sing but..." Tickets were $18 in advance through Rainbow City, Urban Think, and orlandogaychorus.org and $21 at the door. The poster features a white background with abstract green accents and simple blue and green text. Featured artwork includes the logos of the OGC and various sponsors across the bottom of the poster. 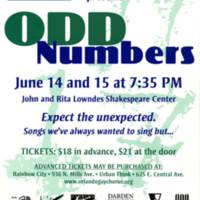