Originally published by This Week in Sanford.

Copyright to this resource is held by This Week in Sanford and is provided here by RICHES of Central Florida for educational purposes only.

By Station WJZ, Radio Corporation of America, 8 to 9 o'clock the evening of Friday, June 25, out of New York City to the World, will consist of a series of sections of an Address setting forth those Facts about Sanford and Seminole County which most truly and attractively represent this City and Section as the right place in Florida for the right people to come to. Mayor Lake stated, Saturday, that he will go to New York in time to deliver Sanford's invitation to the Country at large to come, see, and be convinced. Between the sections of the main address of the Broadcast Hour as arranged for in New York by Arthur R. Curnick, editor and publisher of THIS WEEK IN SANFORD, artists of high repute will give musical selections voicing the period history of Florida, and the great orchestra of WJZ will assist. On the stage of Milane Theater a loud-speaker will be installed under direction of Manager Marentette by Hoff-Mac Battery Company of Sanford, to convey the New York program to the people of Sanford and the County who attend on next Friday Night, June 25, eight to nine. 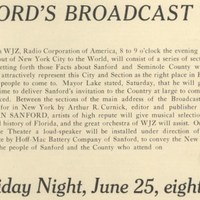