Out! Out with People!

Out! Out with People!

Orlando Gay Chorus Presents "Out! Out with the People!"

A poster for the Orlando Gay Chorus concert "Out! Outh with the People!". The event was held at The Edyth Bush Theater at the Civic Complex in Loch Haven Park in Orlando, Florida on June 20 &
21, 1998. The poster features a dark background with colorful frames of people. A grey border around the page contains information like time, location, with the OGC header at the top of the page.

The Orlando Gay Chorus is a 501(c)(3) nonprofit arts and humanitarian organization part of GALA Choruses. Founded on Valentines Day 1990, OGC is not only one of the largest mixed gay choirs in the United States at over 100 members, but they also boast four smaller ensembles that perform annual concerts, cabarets, and a whole host of community events like Come Out With Pride, Orlando Museum of Art’s Festival of Trees, and World Aids Day memorial services. In 2017, the group performed at over 105 events, including 15 performances for the first anniversary of the PulseNightclub tragedy. Members come from all walks of life and all sexual and gender orientations, including straight allies. OGC lives by the motto “Singing the World to a Better Place” and strives to use music to change attitudes and build a stronger community. 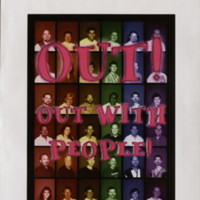