A program for the Orlando Gay Chorus' concert, "Dance the Night Away", on June 24 &
25, 1994, at the Anne Giles Densch-Civic Theater Complex in Orlando, Florida. The program includes short biographies on Music Directors Kenneth R. Ramoska and Terry E. Thomas, program notes, an outline of the show's itinerary, a list of chorus members and contributors. It also contains an advertisement for the Parliament House Orlando. 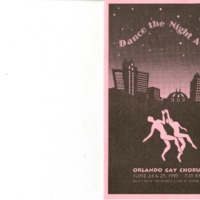