A program for the Orlando Gay Chorus' concert, "Behind Closed Doors", on July 5, 1996, at the Bob Carr Auditorium in Orlando, Florida. The program includes short biographies on the Music Director Aubrey Connelly, the San Diego Men's Chorus conductor Christopher Allen, and Accompanists Christopher M. Fecteau and Glenn Ward, program notes, an outline of the show's itinerary, a list of chorus members and contributors, and a brief history of GALA Choruses. It also contains a short history of the Männer-Minne and the San Diego Men's Choruses. 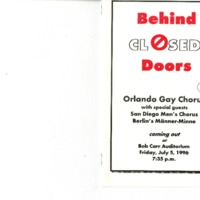