Corner view of the Ritz Theater from South Magnolia Avenue and East Second Street in the 1930s.

The Milane Theater, a silent movie house, opened on August 2, 1923. The theater at South Magnolia was built by the Milane Amusement Co and was named for owners Frank Miller and Ed Lane. The theater was a center for activity in town. There were vaudevilles and Chautaqua programs. Election returns and World Series results were announced here. The theater was known as the Ritz from 1941 to 1977. Renovated in the late 1990s and renamed the Helen Stairs Theater on May 6, 2000, the theater now serves as a cultural center in Sanford.

Copyright to this resource is owned by Museum of Seminole County History and provided here by RICHES of Central Florida for educational purposes only. 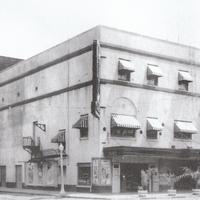