Weeki Wachee Springs Mermaid Bonnie Georgiadis in uniform (wearing an Alix of Miami Swimsuit) speaking to guests in the lobby of the Mermaid Motel. Behind Bonnie are rows of guest books, one for each state for visitors to the motel to sign into. The Mermaid Motel was directly across the street from Weeki Wachee Springs and operated from 1951 - 1966, when the motel changed hands to Holiday Inn. 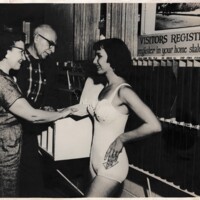