Weeki Wachee Mermaid Geanie L. W. Brooks and her four children, 2 sons and 2 daughters, sitting under a Weeki Wachee Sign outside of the Mermaid Villa. Geanie learned how to weld andoperate heavy machinery at the McCloskey Shipyard during World War II. In the 1950s, Geanie worked as a waitress at the Patio Restuarant at Weeki Wachee Springs and later became a mermaid. She left this position in 1957. After Weeki Wachee, Geanie drove bulldozers, repaired bulldozer tracks, and drove a dump trunk. Even later she worked as a bookkeeper, real estate agent, bowling instructor, and department store manager. Her last job was at Home Depot, she left the workforce upon turning eighty-years-old.

Copyright to this resource is held by Shirley Herdfe and is provided here by RICHES for educational purposes only. 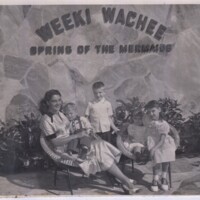