Black and White Photograph of Rita King, a Mermaid at Weeki Wachee Springs, Performing Aerobatics at a Mermaid Reunion, 1960

Rita King, a mermaid at Weeki Wachee Springs, in costume, performing an acrobatic routine. This event was one of the many mermaid reunions that Weeki Wachee Springs hosted, where they invited former mermaids to attend special events. This particular reunion happened on December 1, 1960. Text cut off at the top of the image reads, "Acrobatic Dance Routine for a Mermaid Reunion Show - Age 21."

Weeki Wachee Springs is a state park that opened to the public in October of 1949 by Newton Perry along with a group of investors. This attraction opened as the roadside era of Florida was ramping up and consisted of an amalgamation of vendors including an orchid garden, a river boat tour, as well as the star attraction- the mermaid show that took place in an underwater theatre. The attraction grew to include The May Museum of the Tropics, an ‘abandoned Seminole village’, an show called “Birds of Prey”, and a petting zoo. As theme parks became the new norm for Florida’s tourist industry, Weeki Wachee Springs began steadily declining until the state of Florida absorbed the attraction into the state park system in 2008. The attraction now focuses on appealing to a modern audience, while still preserving its rich history.

Copyright to this resource is held by Rita King and is provided here by RICHES  for educational purposes only. 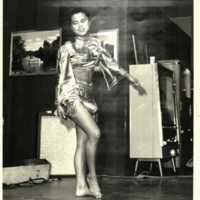