Mary Thomas' second grade class during the 1961-1962 school year at Westside Grammar Elementary School. Freeman E. Baggett was the school principal during that school year. Students photographed include, from left to right: Gail, Toni Monti, James G., Christine, Alfred Greene, Aaron, and Patsy in the first row; Julie, Richard, Joe, and Judy in the second row; Glenda, Fred, Mary Jo, and Robin in the third row; Debra, Jane, Bernard, and Delores in the fourth row; and Skipper, James R., Jeff, and Terri in the last row. 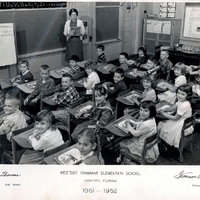