An original letter of correspondence between brothers and business partners Sydney Octavius Chase and Joshua Coffin Chase. Topics discussed in the letter include Sydney Chase's discussion he had on a train from Asheville, the success of the fruit trade in the rest of the country, the Clearing House's proposition, the Growers & Shippers League, the deterioration of the Growers Sale Agency, the disposition of Will Lee.

Chase & Company was established in 1884 by brothers Sydney Octavius Chase and Joshua Coffin Chase. The company sold insurance and later invested in storage facilities and fertilizer sales. Chase & Company was known mainly for its agricultural interests and maintained a series of citrus groves throughout Central Florida. The company was based out of Sanford and became one of the city's largest employers into the early twentieth century.

Dear Josh:
I met Commander on the train, coming back from Asheville, and spent an hour or more with him during the evening, discussing various Florida citrus problems. He did most of the talking.
In the first place he stated he was just completing quite an extensive trip amongst the trade, both in the east and the west, including the Canadian markets, and he had found the trade generally very optimistic not only with regard to the outlook for the Florida citrus crop but also with regard to the outlook for other perishable crops which they expected to handle, and were now handling.
His impression was that on the whole they were making money’ that Bartlett Pears, and other deciduous fruits from California, especially in the Chicago district were averaging $1.25 or more this year over last years, and there was a heavier supply. He said that the day he was in Chicago there were some eighty old cars of Pears offered, and if I remember correctly they averaged close to $4.00 a case. He said that last season, when he made about the same trip, all the dealers were pessimistic and there was no reaction in their attitude towards the Florida citrus deal, but he felt that this year things would be very much better.
During the conversation I asked him a direct question as to whether or not he, personal, as well as the Exchange, were in full sympathy with the Clearing House proposition, and whether or not they would come in provided it could be started this fall in a small way, simply with a view of controlling the movement, get our bearings, and next season make such additions and changes that might seem best to insure success of the organization. He replied in a very positive manner that he, personally, was very much in favor of it and he thought the Exchange was also, but supplimented [sic] his remarks with the statement that the directors had not had the matter up before them for any definite action. He had been out of the state for a month or more, and did not know what had taken place during his absence. He said that before he left it was arranged that Mr. Wirt would attend any committee meetings held during his absence. He spoke very highly of Newton, and said he was the logical man to put the deal across, and further stated that he thought everybody had confidence in Newton’s integrity and ability as a diplomat.
I then touched him up on the subject of the Growers & Shippers League. He was very loud in his praise of Robinson and the work done up to date. He stated that he thought so far as the Exchange was concerned they would continue to give it their full support.
I then asked him what he knew of the Growers Sales Agency. He told me they had practically gone out of business; that Edwards was very hard up, and that Stewart and Edwards had indorsed a note of the Growers Sales Agency with the Exchange Bank amounting to $35,000.00. The company was unable to meet the note, and the Exchange Bank had instituted suit against Stewart and Edwards for the amount.
I asked him what he knew about Will Lee entering the perishable game again. His idea is that it is physically impossible for him to ever get back into any business again. The government is on his trail for making up and filing with them improper income tax reports. They have instituted suit for $200,000.00 covering additional tax which they have assessed after investigation covering several years of his business. They have put the Citrus Exchange on notice not to pay out any more money to Lee resulting from the handling of any of his fruit, and have also notified other institutions with whom Lee has been doing business to hold any of his money. He stated that Lee had gotten rid of many of his citrus holdings, but in some way seemed to have control of them. While he did not say so I assumed that disposition of these groves was made with a view of defeating the government in collecting back taxes. I think the government is wise enough, in the event they investigate these sales, to have them set aside, if it is necessary to do so. It appears that Lee has no credit at the banks, or with any business organization in the state, and for that reason he stated that he could not enter the perishable game this year, and possibly never.
He gave me some other information which I will pass on to you when I see you. As our visit was more or less of a confidential nature what I am writing you is to be regarded as confidential. You might relay some of it to Justice, if you think wise, but it should be considered strictly confidential.
Last night was probably the coolest night we have had in Florida this summer. Yestermorning in Jacksonville it was red hot. I never knew it to be so hot. 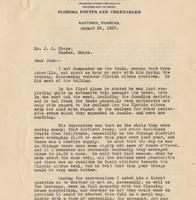 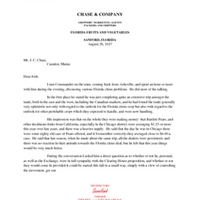