Letter from Joshua Coffin Chase to Sydney Octavius Chase (May 11, 1922)

Letter from Joshua Coffin Chase to Sydney Octavius Chase (May 11, 1922)

An original letter of correspondence between brothers and business partners Joshua Coffin Chase and Sydney Octavius Chase. Topics discussed in the letter include the completion of the contract with Cameron Trent to develop the Sanford Country Club and Golf Course, making regular rounds along the course, Randall Chase as a golfer, and Joshua's advice in regards to purchasing golf clubs.

The Sanford Country Club and Golf Course, which is now named the Mayfair Country Club, was originally purchased as a portion of a 20,000-acre tract by General Joseph Finegan for $40. In 1870, Henry Shelton Sanford purchased the tract and sold some of it in 1878 to Charles Amory.In 1922, the City of Sanford bought 152-acres to design and construct a municipal 18-hole golf course. The course opened in October of 1922 with only four holes available for playing. The remainder of the golf course was opened in September of 1924. From the year 1927-1939, the golf course and country club experienced once of its most successful periods as it saw some of golfs greatest athletes, such as Gene Sarazen and Walter Hagen.

However, the club, for a time, saw a state of disrepair and depression. For a short time, the club became the Seminole County Club after renovation in 1945. Then, in the late 1940s, the New York Giants received the Mayfair Inn for Spring training, which allowed them to take control of the golf course. This led to the most prosperous period of the golf course and country club becoming a part of the PGA tour between 1955 to 1957, seeing players like Arnold Palmer tee-off on the course. In 2007, Maece Taylor, Inc. signed a 20-year lease with the City of Sanford for the golf course. In 2011, Maece Taylor filed a lawsuit against Sanford, claiming that the lease is invalid due to a clause in the contract that states that Donald Ross, a critically-acclaimed designer in the 1920s and 1930s, designed the golf course. The Chase papers contain letters that suggest that Cameron Trent designed the golf course, not Ross.

SANFORD COUNTRY CLUB: Note yours of the 10th reporting on the completion of the Trent contract and the good work done by him in opening the golf course at the old Amery place. If the balance of the work progresses as rapidly as the first thirty days, you will have an old, seasoned course there inside of twelve months.

Just as soon as you can get around to it, start in on regular rounds of at least twice a week and as much oftener as you can. It will do you lots of good. Even R.C. is quite a golfer, and goes out at it with just as much vigor as a younger man. When we were together over in Switzerland he wanted to play all the time and almost killed the caddies. He insisted on playing 27 holes before lunch and then played 9 holes as the caddies were fagged out and had to rest up. Randall's Italian caddy, an old woman of about 70, could not speak a word of English but she indicated her fatigue by opening her mouth and pointing to it with the forefinger of her right hand, and rubbing the place where her stomach should be with her left hand.

The only reason the old warehorse stayed with the deal so long was owing to the fact that I beat him on the firs t18 holes and he was trying to win the next nine, but he failed.

After you have done your nine holes twice and walked 6030 yards it will aggregate about four miles when you take into consideration all the unnecessary steps you make in playing from side to side and following your ball around. I am looking forward to a try-out at it.

You had better postpone buying your golf clubs until you come to Jacksonville or when you are in Philadelphia. My advice would be to buy just as few clubs as possible at the start, and would suggest first a brassy driver, a putter, a mid-iron and a mashie. This will give you the necessary assortment and you can pick up the other clubs as you find necessary. 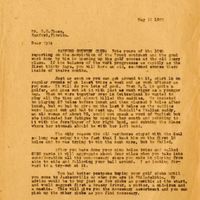