Episode in the Orlando Philharmonic Orchestra's 20th Anniversary video series, chronicling the orchestra's history in Central Florida. This episode features an interview with Andrew Lane, who is a horn player, one of the orchestra's founding members, former Principal Pop, and current Resident Conductor. Topics in the video include the closing of the Florida Symphony, the creation of a new orchestra, how the orchestra obtained funding, trombonist and general manager Mark Fisher, an early concert in Kissimmee, and Lane's proudest accomplishment.

In celebration of the Orlando Philharmonic Orchestra's 20th Anniversary season, this video series chronicles the orchestra's two decades of history in Central Florida. In this episode, founding member and former Principal Pops & Resident Conductor Andrew Lane talks about the beginning of the orchestra.

And the reason we did that—the reason we tried to—to build something back quickly, uh—there were a lot of fine musicians in the area that have lost their jobs. We wanted to keep them in the area. And, um, of course we wanted to go back to the supporters of the Florida Symphony and say, “Look, you know, we’re gonna try to do something new here—something that works for our community.” So we did exactly that, but what we found out was people who had contributed a lot of money to the Florida Symphony were not ready to contribute to another orchestra. They were concerned about how it would be managed and we learn that very quickly and it was a very difficult learning process.

We didn't start from scratch in the sense that there were—there was a core group of musicians in town. Um, and—but what the challenge was they had other options. They had family they had to feed, you know. They had to do everything that they could. So going to them and saying, “Hey, look. Donate your time to us and we'll create this orchestra again,” you know, really wasn't gonna fly. We had to find funding to put this together an, um, you know, the—the artistic integrity of the organization was first and foremost on our mind. And so that was that was another big challenge we have to find the funds to put together a concert series that would keep these musicians involved and I think, you know—looking back on it I think that work pretty well.

The story that I think dates back the furthest in an organization, that I kinda chuckle about every now then, had to do with Mark Fisher, who’s now general manager and principal horn of the orchestra. When we were first starting the orchestra, we were doing everything we could to get support. I mean, everything we could. And we were fortunate enough to be asked by the City of Kissimmee to do a concert at a local park in Kissimmee. And with the concert was really well attended. it was really great for the organization to do it. The problem was that we didn't have a lot of money to produce this concert. So I conducted the concert, and Mark played French horn in the concert. But we are also stage crew and, you know, we had to get out hours before the event. we had to set up the entire orchestra. The orchestra performed. We had to tear down the orchestra, put everything back on the truck, and drive all the way back to Orlando, unloaded the truck. Mark and I—we were exhausted and we sat down on the kind of the lift on the track and it was about one o'clock in the morning. And Mark looks at me and he says, “I hope we don't ever talk about this as the good old days.”

When I think about the accomplishment, I think how lucky I am that I even got to do it and it was really by default. The orchestra needed somebody to conduct for a concert. I had had conducting classes in college, had always had an interest in it, um, and I have my opportunity to do it. So I’d really have to say my proudest accomplishment was the first time I did it for the Orlando Philharmonic [Orchestra], because, as I said, these musicians fabulous and all I had to do was get up there and be concerned about myself and they took care of the rest. 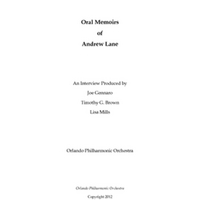