Six year old Patricia Ann Black (1956- ) with her two year old nephew, Benjamin Hawkins, Jr. (1960-), in 1962. The two children are pictured in the front yard of the Black family home located at the corner of East Tenth Street and South Bay Avenue in Georgetown in Sanford, Florida. Hawkins is the son of Patricia's oldest sister, Vivian Louise Black (1940- ). As an adult, Hawkins moved to Rochester, New York. 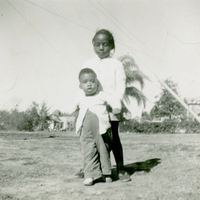