An original letter of correspondence between brothers and business partners Joshua Coffin Chase and Sydney Octavius Chase. Topics discussed in the letter include the latest Isleworth Grove report and possible allowances for depreciation, losses, and other deductions.

ISLEWORTH REPORT: Turned copy over to J. C. Twyman who has gone over same and written you regarding certain rulings in the handling of similar returns that have been called to his attention and are matters of record. With these rulings, he did not feel that Weill & Oliver would have much trouble in including the Department to allow depreciation, losses and other deductions that appeared in your original Isleworth report.

Yesterday H. W. Skinner, President of the Milwaukee-Florida Orange Company, was in the office. Upon his last visit to Florida he handled with Twyman the 1917 report of his Company. Twyman recalls very distinctly that the examiner handling this report on Milwaukee insisted that the company should make deductions on orange trees. The only question in Twyman's mind was the original values set up on the Sanford books when the Isleworth property was incorporated. At that time you made a valuation on the different groves without paying very much regard to replacement, depreciation or any other value. None of us handling the matter thought that the Isleworth Grove Company would be anything more than a holding company for the various properties in which we were personally interested.

If it is necessary to place a value on Isleworth in line with what we have always considered it worth, it would be necessary to capitalize certain freeze exempt features, which has never been done. The trunks of the old trees that were there prior to the freeze of 1894-95 and which came through that cold practically intact, indicate that we have a value there which we are entitled to capitalize. The freezes that have happened since 1894-95 have always done less injury to Isleworth than to other points, and this has enabled us to bring the property into proper bearing capacity and enabled us to have good crops and realize good prices for the past six years.

When this matter comes right down to a final hearing it may be necessary for you or Leffler or both to spend about a day or so wither in Philadelphia or Washington with Weill, and believe that when you get through with the examiner, he will understand that Isleworth is in a class by itself. 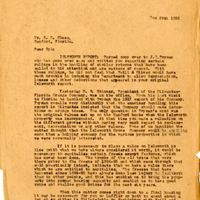