An original letter of correspondence between brothers and business partners Joshua Coffin Chase and Sydney Octavius Chase. Topics discussed in the letter include the condition of grapefruit trees at Isleworth Grove, upcoming shipments, and the rapidly decreasing quality of grapefruit still on trees.

ISLEWORTH GRAPEFRUIT - All of the fruit now on the trees is from off-bloom. We have only moved about sixty (60) boxes in a car to Angelo, which realized $3.75 FOB. Out of the same lot we included eight (8) boxes in a car which moved to New York auction and which sold on the 23rd at the $5.00, which is equivalent to $3.75 FOB.

The car for export which moves today runs sizes mostly 70s and 80s, with some few sizes larger and smaller. The fruit is thick-skinned, inclined to be nosey, and is certainly not over-supplied with juice. It may be a mistake to send this fruit to England, as it may not realize as much there as it would in the markets in this country.

This morning the writer looked over the grapefruit sill on the trees, and finds that the quality is going off very rapidly. He instructed Hutchinson, and also Smith, to pick and move two (2) cars of this fruit during the coming week, and believe it will be advisable to do this, as the writer feels the prices will go lower and the quality will deteriorate. There may be all together in the neighborhood of ten (10) cars of this fruit, and we netter string it out with the Valencias.

Unfortunately Hutchinson always has some excuse when we want to rush operations. This morning his truckman was laid up and three (3) of his packers were away. The coming week we want to load out on an average of two (2) cars of Valencias per day. Hutchinson was instructed last week to provide a sufficient force to handle the job, and promised to do so. We wanted two (2) cars of the Valencias to move today. He only got one car going, claiming that owing to fall-downs he could not get it packed in time to have it precooled.

Unless Hutchinson can show himself big enough for the job at Isleworth, we better try to place someone else there next season when we will have so much more fruit to put thru the house. 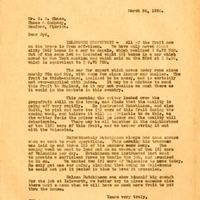