Letter from Joshua Coffin Chase to Sydney Octavius Chase (May 11, 1929)

Letter from Joshua Coffin Chase to Sydney Octavius Chase (May 11, 1929)

An original letter of correspondence between brothers and business partners Joshua Coffin Chase and Sydney Octavius Chase. Topics discussed in the letter include estimates of crop balances at Isleworth Grove, upcoming shipments, and a letter from Joshua written to S. M. Crowell.

ISLEWORTH. Upon my visit there this morning there was one car packed and in the precooling room, and a second car was well on its way. These will be the only two cars moved from Isleworth today, making a total of 12 cars for the week. Hutchinson estimates the balance of the crop approximately as follows, both in field crates in the house and on the trees:

4 cars field crates in the packing house
5 cars on the trees to be picked Monday and Tuesday. This fruit shows much better color than the fruit now in the house.
1 car approximately, of Lamb Summer and
1 car of Pineapple late bloom.
11 cars approximately,

to be packed the coming week unless there is some ruling against it. The writer will hold over in the precooling rooms, 3 or 4 cars of good colored Valencias for loading and shipping Monday, week beginning May 20th. We believe we can load all of these cars and move them for sale in New York the following week, as small sized are in demand and bringing the most money in New York. We would do well with the Lamb Summer and late bloom Pineapples.

Attached find copy of a letter to Crowell which is self-explanatory. If you have any reason for disagreeing with these views, please countermand same. The writer does not want Dr. Newell or anyone connected with the Plant Board to complain later if trouble develops at Isleworth, that he prevented the Plant Board clean-up crew mopping up Isleworth. We only don't want to prevent it, be we want to invite them to go in and find fruit that may have been left on the trees by our crews. 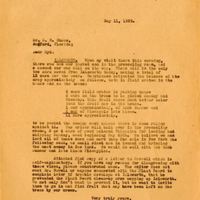