Letter from Joshua Coffin Chase to Sydney Octavius Chase (May 23, 1924)

Letter from Joshua Coffin Chase to Sydney Octavius Chase (May 23, 1924)

An original letter of correspondence between brothers and business partners Joshua Coffin Chase and Sydney Octavius Chase. Topics discussed in the letter include C. E. Browne's opinion regarding the quantity of fruit and the moving and cutting of bearing trees at Isleworth Grove, as well as J. Q. Barker's proposition to purchase the cabbage palmetto at Tosohatchee Palmetto.

ISLEWORTH: Referring to your letter of the 21st reporting on your visit to Isleworth, Note Browne's opinion regarding the quantity of fruit, and trust that the output of tangerines will show equal to last year.

We have been moving large bearing trees and cutting the bearing tops off of others, so that it is hardly reasonable to expect that under such circumstances the yield will show any increase. As a matter of fact, the writer believes there will be a decided falling off in the volume of business from Isleworth until the mutilated trees come back into production.

TOSOHATCHEE PALMETTO: Note that J.Q.Barker, representing Major W.B. Doe,of 959 Riverside Avenue, with an office in the Bisbee Building, has made you a proposition to purchase the cabbage palmetto on the ranch on the basis of $ 2.00 per acre for the palmetto timber, paying one-half down in crash and the balance in one and two years, with the privilege of removal any time within ten years.

The telephone book does not show any one by the name of J. Q. Barker but it does show W.B.Doe, Lumber, Bisbee Building, and also with an office on Commodores Point. Frank Bisbee knows practically nothing about this party with the exception that he pays his rent very promptly. He does not know of anyone in town who is well acquainted with him.

We are now trying to reach George D. Baldwin,Vice-President of the Commodores Point Terminal Company, who may be able to give us some information. Will pass it along to you.

Have you figured out how much acreage you have to cabbage palmetto, and considered how a contract of this kind might affect unfavorably a sale of the entire property, should an opportunity offer? It might be a disadvantage to have it hanging over the land. 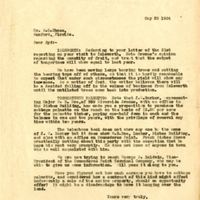