An original letter of correspondence between brothers and business partners Joshua Coffin Chase and Sydney Octavius Chase. Topics discussed in the letter include the great deterioration of fruit in the previous week, hot weather at Isleworth Grove, the wilting of trees on higher parts of the grove, the good condition of valencias, and the waste of grapefruit.

ISLEWORTH: the writer has just returned from there. They are now picking tangerines across the canal and expect to finish Wednesday. During the last week the fruit has deteriorated greatly, due to hot weather, and is showing the effects of the cold. They only had twelve pickers at work in spite of the fact that the writer has been after Browne for the last two weeks to increase his picking force. Instead of getting larger it has really shrunk.

During the past few days the weather has been very hot and the trees on the higher parts of the grove are beginning to show signs of wilting. There is one block of trees near where the young alligator pears are planted that should be irrigated, and the writer so advised Browne. Unfortunately, making up the plat is a good excuse for Browne attending to this job and not getting on the outside. Browne is instructed to get together some additional pickers, using some in clearing up the tangerines and others in picking fruit from some of the trees that are dropping heavily. We also want this increased force to use in picking the pineapples, which will soon begin to drop heavily.

I am very much in hopes that when you reach Atlanta you will find conditions there in such shape that you can get back here some time this week.

glad to report that the Valencias are holding on in good shape but there is a big waste in the grapefruit. Fred Lord, of Lord & Spencer, is now at Titusville going over McNiff's holdings and is due to reach here Tuesday night or Wednesday morning. He wanted a price on the pineapple oranges now en route to New York but we decided not to make any changes in our marketing plans. We may make him a price on the last car from the White and Kiser Groves. The White GRove picked over 1200 field boxes.

Stanley is instructed to pick all other varieties except the Valencias from all the trees in that block, and then make his arrangements to pick the seedling oranges from the Goodall Grove. In this way we can keep some fruit moving from that territory during the next month or six weeks. When Lord is here on Wednesday I will take him out to Isleworth and see if I can interest him in the balance of the grapefruit. If we can make a guarantee joint account deal[?], we may do so. 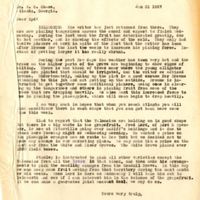