Original letter from A. Q. Lancaster to Randall Chase, August 9, 1919.

Digital reproduction of copy of original letter from A. Q. Lancaster to Randall Chase, August 9, 1919.

Lawrence Watkins, (white,) James Davis, (colored) both came from Ga. with Mr. Bona. These boys had a fight this morning with shuffle hoes. Watkins cut Davis on the leg slightly, and Davis struck at Watkins' head and he threw up his hands and the hoes struck both his hands and cut him bad. We taken Watkins to the hospital in Orlando and Davis is in jail at Orlando. Will have Davis in court Monday morning at 10 o'clock. Davis ran when he struck Watkins, and as soon as we got Watkins started to the hospital we got our guns and started to capture Davis, and made quite a search before we found him. He passed through Windermere about 10 minutes before we got there and got a machine there and started after him and went to Gotha but saw nothing of him, and the sheriff came out on the rialroad[sic] to find where he left the road, and they found him just the other side of Windermere hid behind a pile of railroad ties, and the other sheriff taken him to Orlando. 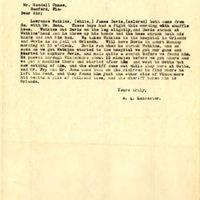