An original letter of correspondence between Randall Chase and his uncle, Joshua Coffin Chase. Topics discussed in the letter include a fight between a white laborer's 13-year-old son and a colored laborer at Isleworth Grove and the boarding arrangements for the boy once he is released from the hospital in Orlando.

You will by this time have received the copy of one of Mr. Lancaster's letters regarding the fight between some of the Georgia men Mr. Bona brought down.
It seems that Watkins, the white fellow, is a son of the old man who has worked for Chase & Company for several seasons on the East Coast and was in Georgia during the peach deal. The son is just 13 years old, and, according to the doctors' advices will not be able to do any work for sometime, if he ever is. He was cut, badly, on both wrists, and they are afraid will not have good use of his hands. He is now in the hospital in Orlando, but is able to be moved as soon as Mr. Watkins can find a place to take him. Mr. Lancaster refuses to let either the boy or the negro come back on the place, which I think is very wise.
Watkins was just in the office and wanted to know if we could help him out anyway. I suggested that he see Mr. Bogue, who knows him, and who is now in Orlando, and see if he could not do something. In the event he can not it might be possible for him to obtain board for himself and son at Windermere and work on the grove during the day. In this way he could take care of his son and have work. Mr. Lancaster I believe is perfectly willing to have Mr. Watkins on the grove, but, as stated before, will not allow the boy on the place.
If you have any suggestions would be glad to have them.
I have not given Mr. Watkins any money, and don't want to. 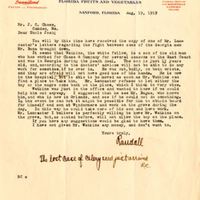