Letter from William H. Falconer, Supreme Vice President of the Woodmen of Union, to Michael Gladden, Jr., a deputy of the Union. In the letter, Falconer urges all local deputies and officers to attend the Deputy and Officers' School, a instructional course for employees of the Woodmen of Union held in the Woodmen of Union Building, located at 501 Malvern Avenue in Hot Springs, Arkansas, between May 11-16, 1931. The Woodmen of Union, founded in 1883, was a fraternal benefit association that offered insurance benefits for its members and also participated in various social activities.

Michael Gladden, Jr. (1899-1982) was the executor of the estate of George W. Oden (1862-1939), a successful businessman and citrus grower in Apopka, Florida. Gladden was born in South Carolina in 1899. He married Elizabeth Gladden and together they had a son, William, who was born around 1904. According to census records, the Gladden family had moved to Jacksonville as early as 1910 and then moved to Apopka. After Oden's death in 1939, Gladden continued to manage the legal documents of Oden's estate.

Originally created by William H. Falconer and owned by Michael Gladden, Jr.
Collected by Carol E. Mundy between 1990 and 2009.
Purchased by the University of Central Florida Libraries, Special Collections and University Archives in 2009.

The Supreme Officials are urging all the deputies and officers of local lodges attend.

In the Insurance World, as in other fields of endeavor, good salesmanship requires that the salesman be "on the job" and intelligently inform his prospects of what he sells. A mistake not only lessens the possibility of further sales, but, weakens the influence of the salesman and the Company he or she represents.

Come to the Deputy School May 11-16 and help us maintain the high standard which the Woodman of Union hes already attained.

Kindly inform us of your intention at the earliest possible date so that your name may be included on our record.

With best wishes, I am 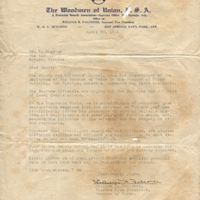