Marie Jones Francis, the "midwife of Sanford." Francis left behind a successful hotel and restaurant she owned in Sarasota in 1942 to return to Sanford and become a midwife. World War II caused a shortage in doctors and nurses, so Florida's Children's Bureau sent Francis to Florida A & M to acquire her practical nursing license in 1945. She specialized in premature babies and returned to Sanford to aid her mother, Carrie Jones, at Fernald-Laughton Memorial Hospital before they opened the ward in their home. "When her health starting failing," she recollects in a newspaper article, "I took over." Francis converted her house at 621 East Sixth Street to also serve as a maternity ward, where she delivered over 40,000 babies over her 32 year career. She became a midwife in the same vein as her mother, Carrie Jones, and together they ran the Jones-Francis Maternity Hall in Georgetown. 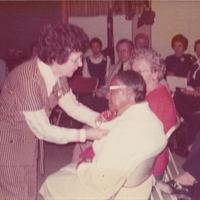