A record book owned by Marie Jones Francis, the "midwife of Sanford," for the Jones-Francis Maternity Hall, located at 621 East Sixth Street in Georgetown, an historic black neighborhood in Sanford, Florida. The house was originally the home of Reverend John R. Hurston, the father of Zora Neale Hurston.

TO REORDER THIS BOOK, SPECIFY NUMBER, RULING AND THICKNESS AS INDICATED ON BACKBONE OF BOOK
A BOGRUM & PEASE PRODUCT 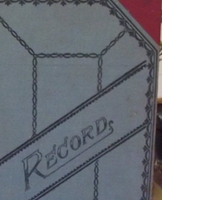