A License to Practice Midwifery, issued by the Florida State Board of Health Department, certifying the completion of midwifery requirements by Marie Jones Francis. The certificate was issued in Sanford, Florida, on May 27, 1943, and signed by Dr. Lucille J. Marsh, the Director of the Bureau of Maternal and Child Health.

Florida State Board of Health

Digital reproduction of original license, May 27, 1943: Florida State Board of Health, Jacksonville, Florida.

Originally created by the Florida State Board of Health and owned by Marie Jones Francis.
Inherited by Daphne F. Humphrey.

License to Practice Midwifery
This is to Certify, That
Marie Francis
of Sanford, Florida County of Seminole Florida, has met the requirements of Chapters 457 and 154, SEctions 381.49 - 381.57, Florida Statutes 1941. 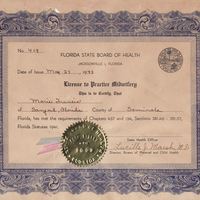