The Refoe residence, located at 619 South Sanford Avenue in Georgetown, an historic African-American neighborhood in Sanford, Florida. The house was the home of the Refoes, a family of educators who served the black community of Sanford. The Refoe family moved into the house on December 15, 1950. From 1946 to 2010, the Refoes taught in Seminole County continuously for 64 years.

Herman L. Refoe, Jr. and Shellye L. Refoe began teaching at Midway Elementary School in 1946. They quickly became involved with the school and the students, starting clubs and coaching teams, along with teaching African Americans in the Midway and Canaan areas. Their daughter, Annye Refoe, was born on January 29, 1951. Herman became an Assistant Principal of Goldsboro Elementary School in 1959. About two years later, he became the Principal. Herman remained the school principal for over 11 years, until his retirement in 1972. Shellye continued teaching at Midway until 1962, when she began teaching at Crooms High School, followed by South Seminole Middle School, Milwee Middle School, and finally Lyman High School. She moved around as a result of Seminole County’s School Board’s attempt to integrate black teachers. Shellye retired in January 1974.

Annye graduated from Seminole High School in the class of 1969. After her treatment in the newly integrated Seminole High School, she decided to enroll in a historically black college/university. She graduated from Fisk College in Nashville, Tennessee, with a bachelors’ in English in 1973. Upon her return from college, Annye began teaching in August 1974 at Lake Howell High School. In 1982, she started teaching at Seminole Community College, where she later became the Dean of the Arts and Humanities.

Originally created by Julio R. Firpo and publsihed by RICHES of Central Florida. 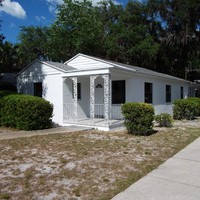