Black (1929-2012) was the son of Pilgrim Black (1905-2002) and his first wife Mae Henry Gilmore, who also had a second child named Bessie Mae Black that passed away around 6 months old. Black played baseball throughout high school and was drafted into the military during the Korean War on January 9, 1951, when he was 22. After two years of military service and receiving a discharge on February 2, 1953, he went on to play baseball in the Negro Baseball League at age 24. He also played for the Orlando Sentinels, a white baseball team, in 1954. While playing baseball, Black was known by several nicknames that he acquired as a youth, including "Allstar" and "Kid Blister." At age 29, Black became a long-distance truck driver, a profession he continued for58 years. He retired several times, but returned to the job due to his love of the work. Black finally retired permanently at age 77, when his employer would no longer insure him. He was later diagnosed with cancer and was cared for by his half-sister, Patricia Ann Black (1956-). Black passed away in December of 2012.

Digital reproduction of photocopy of original black and white photograph. 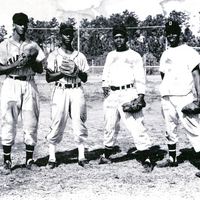