The latter three children are from Patricia's marriage to William Bigham, Jr. (1952-). William III was born in Rochester, New York, and raised in Wayne County. He began teaching microbiology and anatomy at State University of New York in Brockport in 2013. Both Brandon and Tempestt graduated from North Rose Wolcott High School in Wolcott, New York. At age 19, Brandon attended Shear Ego, a barber school in Rochester. He also founded a barber shop called B. Black's Barber Shop, located on Route 414 in North Rose. As of 2013, Tempestt was attending Elmira College in Elmira, where she was studying nursing. She also joined the U.S. Army and is currently serving, as of 2013. 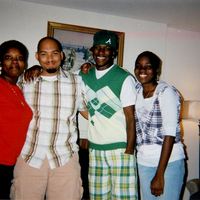